Love at the Cliffs of Moher 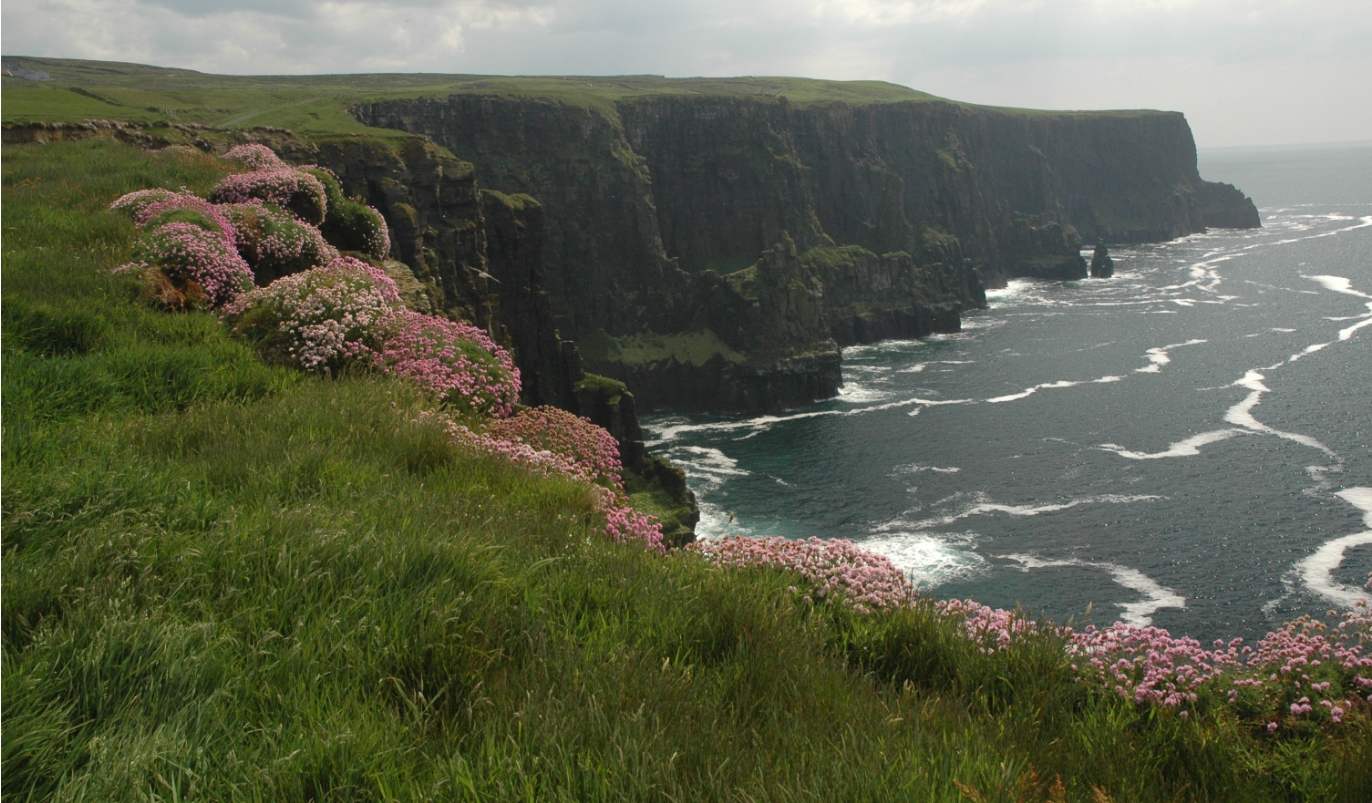 Love at the Cliffs of Moher

It was early February in 1990 that I found myself standing at the Cliffs of Moher in Ireland’s County Clare.  “Standing” might not be the most accurate term for the effort I was making to simply not be blown over by the driving wind and rain crashing into the Cliffs from Galway Bay.

As a bit of background, I’m the founder and director of Walking The World. It was only a few years earlier in 1987 that I started my company to provide walking tours for those adventurous souls 50 years of age and better.  And, since I was half Irish and had visited this area earlier in 1972, it was a foregone conclusion that I would eventually return to scout the area for a future adventure travel destination.

The name Moher comes from Mothar or Moher, the name of an old fort that used to stand at the southern tip of the Cliff’s range.  In Gaelic you might use the terms Moher Ui Ruis or Moher Ui Ruidhin.

Anyway, the Cliffs are one of the biggest tourist attractions in Ireland and ring the coast from just outside the small fishing village of Doolin south to a point called Hag’s Head.  Rising from 390 feet at their southern point to just over 700 feet near O’Brien’s Tower south of Doolin, the Cliffs of Moher are some of the highest vertical cliffs in Europe.

I had scheduled just under three weeks to discover the best trails, food and drink, local guides and traditional Celtic music in Counties Clare and Kerry. My initial thought, while being buffeted that day by the updrafts of wind and rain at the Cliffs, was that a few hours in a pub next to a warm peat fire, Guinness in hand, might be a better proposition for that particular day.  So, for a few hours of peaceful bliss, I shook out my raingear, sidled up to the bar at O’Connor’s Pub in Doolin, and proceeded to enjoy the dark, heady flavor of my first Guinness. But…

Some place, deep inside of me, was drawing me back to the Cliffs.  Earlier in the day, standing high on the Cliffs above Galway Bay, there was something raw, ancient, and primeval calling.  Even the rain was inviting.  Cold and wet as it was, the small incessant drops of rain were like an army of small voices drumming against my wall of memory, calling to that ancient Irish lineage deep inside that I had yet to acknowledge. It was a calling even a warm peat fire or frothy Guinness could not delay. Back to the Cliffs I went.

The rain had now subsided, the clouds were thinning, and a few brilliant rays of sun were poking through. In 1990 the Cliffs were not a huge attraction.  There was no multi-million-dollar world-class visitor center, only a small, dirt parking area. Leaving my small rental car, I walked to cliff’s edge.

Standing tall, rooted in Irish soil and ancient rock, feeling the wind and sun on my face, with a slight mist in the air, I heard the faint sweet notes of an Irish ballad wafting on the air. And that’s when I fell in love at the Cliffs of Moher. Fell in love with a land, people, and place that has always been deep inside me but was now fully reawakened.

The notes from the soft, sweet, clear voices of three young Irish lassies unlocked ancient memories and ancestral Irish connections that had lain dormant. I knew then that I was home.  Whether I lived there or not, I was rooted in that place.

The rest of the story. The Mulrooney Sisters

The three young ladies playing and singing at the Cliffs of Moher in 1990 that helped bring to life my Irish connections were the Mulrooney sisters: Tina, Dana, and Marian.  Tina had a small harp and the three had a collection of cassette tapes for sale. 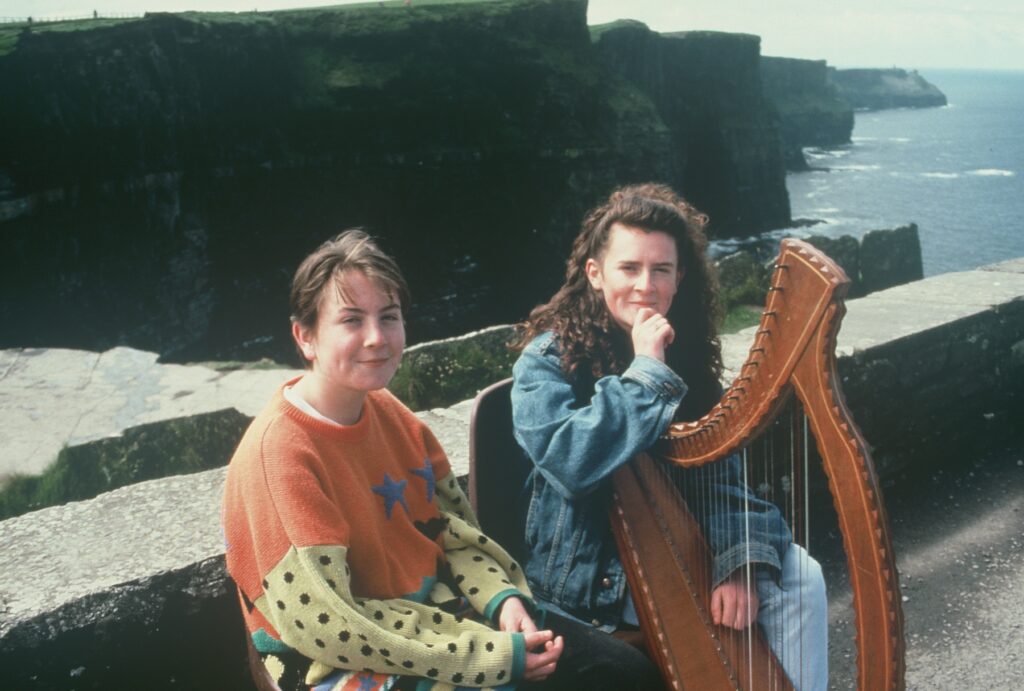 As I am wont to do, I asked the three sisters if they would come play for my walking group in Doolin that week in June, 1990.  They said they would have to ask their “Da”, their Dad, first.  And they did. He came and interviewed me for quite some time before offering his permission.  After that, for a number of years, the Mulrooney Sisters would play at our B&B.  It was one of those rare, beautiful experiences I will never forget.  Our walkers, too, fell in love with the girls and their music.

Fast forward to 2013 when Tina and I were reconnected through social media.  Tina has traded up to a full-size harp but still plays at the Cliffs of Moher and is recognized as one of Ireland’s national treasures.  In 2013, I was honored to have both Tina and her sister Dana share some of their music, again, with our walking group at the same B&B we’ve used in Doolin for years As always, it was magical.

If you’ve ever wanted to walk through the beauty and history that is Ireland, I invite you to join our Irish walking tours in June or September, 2020.  Be prepared though to be captivated by a beautiful landscape, wonderfully friendly people, a rich and ancient history, and food and drink that have become wonderfully gourmet.

Until we next meet on the trails,